Background
Globalization and Domestic Business Opportunities Have Called for The Emerging Of Modern Government Affairs In China. (The chart below shows how China has developed in the past 40 years.) In the late 1990s, especially after China joined the WTO in 2001, MNCs flushed into the Chinese market. In order to successfully enter and operate in this foreign land, the companies brought their products, together with other essential supporting teams (legal, marketing, management consulting, public relations, etc) into the Chinese market. Government Affairs Industry, with specific focuses on MNCs was born accordingly. From the very beginning, we have set our primary goal of government affairs as enabling the harmonious and healthy development of MNCs in China and create a win-win situation with China. Our key functions include:

1. Relationship Building as the Starting Point
Government Affairs professionals started their priorities as building government relations. What Chinese called Guanxi (relationship, network) is the heart of the Chinese business process. For us dedicated to serve MNCs, conducting the deal through the backdoor is prohibited. Instead, building a long-term constructive relationship is our goal. In order to achieve this goal, we need to:
1. 1)    Understand the Chinese government, in particular its organizational structure and working procedures, and
2. 2)    Identify the key government agencies relevant to the company’s operation and business (government stakeholder mapping), so as to
3. 3)    Use limited resources to build effective government relations.

2. Ice Breakers and Navigator For the Market Access
China joined the WTO in December 2001. In order to fulfill China's commitment to the WTO, as well as to develop China's economy, Chinese market opened up to MNCs, especially in the manufacturing industry. A large number of MNCs entered into the Chinese market in the form of mergers and acquisitions, joint ventures, wholly owned foreign enterprises (WOFE) and Greenfield investments. Government affairs became the icebreaker for them in market access. During that period, the government had a strict and cautious attitude in the approval of foreign investment into Chinese market. We carefully studied the approval procedures of the Chinese government for these market access projects. Along with the approval process, we identified the key stakeholders in the central and local governments with whom we should establish relations, and understand their relevant policies, regulations, and industry standards. Following the Chinese rules and regulations, these MNCs were escorted by us into the market. In the process of market entry, they established efficient communication channels with government agencies and officials at all levels, who were the key stakeholders of the approval procedures. For example, as a government affairs consultant, Mr. Haiying Yuan participated in the work of mergers and acquisitions, joint ventures and green field plant construction in Wuhan, Qingdao, Harbin and Foshan and other places for Anheuser-Busch (A-B). In order to successfully implement these projects, we assisted senior executives of the A-B company to meet with officials of the State Council, provincial or municipal governments, including the National Development and Reform Commission, the Ministry of Commerce, the Ministry of Light Industry, and the Ministry of Foreign Affairs, receiving their approval of investment activities in China. It is worth mentioning that, although these government meetings helped the government to have a clearer understanding of the company's investment intentions in China, which facilitated the project's approval, all the market access projects are still subject to the approval of the government's functional departments. For major investment projects, multiple departments are often required to study together, reach consensus, and make decisions. The situation of one leader makes the decision on the spot has seldom happened, especially for the macro administrative government organization like the Ministry of Foreign Affairs, their attitude is more cautious.

3.    Firefighting Team – Crisis Management in The Early Days
As soon as MNCs entered the Chinese market and began to operate, they started to face various challenges, such as labor relations, taxation issues, technical standards, product quality, and intellectual property right protection, etc. In order to support the smooth operation of MNCs, the GA team in the late 1990s focused on “firefighting”, to solve the crisis in the actual operation. In this process, we began to introduce some professional practices such as issue/ crisis management from Europe and the United States. One of the greatest challenges facing these companies, particularly fast-moving consumer goods companies, was the protection of intellectual property rights, especially trademark infringement. In June 1999, eight companies, including Budweiser, Procter & Gamble, and Nike, established the China Anti-Counterfeiting Coalition. The Coalition was committed to work with governments at all levels in China to combat counterfeiting and to protect the legitimate rights and interests of enterprises. Under the guidance of the Chinese government, the Coalition changed its name to the Quality Brand Protection Committee (QBPC) and held its founding conference on March 23, 2000. Today, QBPC has nearly 200 members and has become an important force in China's intellectual property right protection.

4.    Policy Research & Advocacy - The Core of Government Affairs
As the firefighting progressed, the GA team realized that in-depth policy issues often beneath the surface of the flame. To completely contain the fire, it was necessary to influence the policy making process based on good understanding of China’s regulatory environment. With this believe, policy research and advocacy has gradually become our focus. Under this circumstance, in 2001, the name of the China Government Relations Committee (CGRC) of the American Chamber of Commerce (AmCham-China), was changed to China Government Affairs Committee (CGAC) to show the shift in our work priorities. In the process of influencing policy, we deeply felt that it was difficult for an individual company to work alone. In addition to communicate with the Chinese government on its own issues, a company must also try to turn its own issues into common challenges of a group of companies and join the group to communicate with the Chinese government collectively. To this end, we initiated a number of effective advocacy programs and produced a series of communication tools, such as the AmCham-China White Paper. Those programs have become another powerful and welcomed vehicle to communicate with the Chinese government.

5. Building Win-Win: The Only Way to Success in China
Doing business with friends is an essential ideology in China, creating a Win-Win with China (Chinese government and Chinese people) is the principle of practicing government affairs in China. It is very important to understand that the Chinese government's expectations for MNCs have been shifting over the past two decades. For example, in the 1990s, the focus was on capital investment, employment and taxation brought by MNCs. In early 2000, more emphasis was placed on the sharing of advanced technology and management experience between MNCs and their Chinese counterparts. Today the Chinese government hopes that MNCs can understand and adapt to the new changes, maintain confidence in the Chinese market, and work with China to strive for a new win-win situation. By understanding Chinese government's changing expectations for MNCs, we help MNCs constantly adjust their positioning to keep them in a state of “win-win” with China. For instance, many MNCs nowadays are conducting corporate social responsibility activities in order to make themselves seen as responsible corporate citizens for the Chinese society.

6.    Corporate Reputation – The Foundation for Effective Government Affairs
With the rapid expansion of MNCs in China, the question of whether MNCs were contributors or harmful threats to China's economy was gradually surfaced in China. Companies with “threat” hats had little room for growth in China. Therefore it is vital to cultivate a corporate image as a contributor among all levels of governments. With the endorsement of the government, this positive image would be disseminated into the community and society. Doing business with friends is an essential ideology in China, creating a Win-Win with China (Chinese government and Chinese people) is the principle of practicing government affairs in China. Working together with public relations, marketing, legal, management consulting and other professional teams, we try to build this 360-degree stakeholder management image.

7.    Building Capabilities of Local Government Affairs
When MNCs business activities gradually expanded from first-tier cities to second-tier, third-tier and fourth-tier cities, how to establish effective capabilities of local government affairs to support local operation became a major challenge to the GA team. How to use extremely limited resources to meet the growing demands is a question we have to answer. On the one hand, the MNCs local managers dealing with the grassroots level officials are our valuable resources for government affair; on the other hand, they may create more challenges for the company. The key is to cultivate those front-line practitioners to understand how to practice constructive government relations while avoiding practices of backdoor relationship “guanxi”, thus enabling them build the grass-root forces to implement local government affairs.

8.    Cross Culture Communication with Headquarters Became A New Challenge
With the development of China's economy, China as a pivotal economy has gradually been weighted more heavily in the MNCs’ global headquarters. Changes of China's policies, regulations and technical standards have been of great concern to their headquarters. Therefore, how to conduct cross culture communication with senior executives at HQs has become our new challenge. In order to meet this challenge, government affairs team has been doing cross culture training for executives both in China and at HQs. In the meantime, we are also playing an increasingly important role in the formulating of MNCs China's strategy, navigating MNCs’ cruise sailing in the water of China's complex political and cultural environment, bringing government affairs into a new realm. 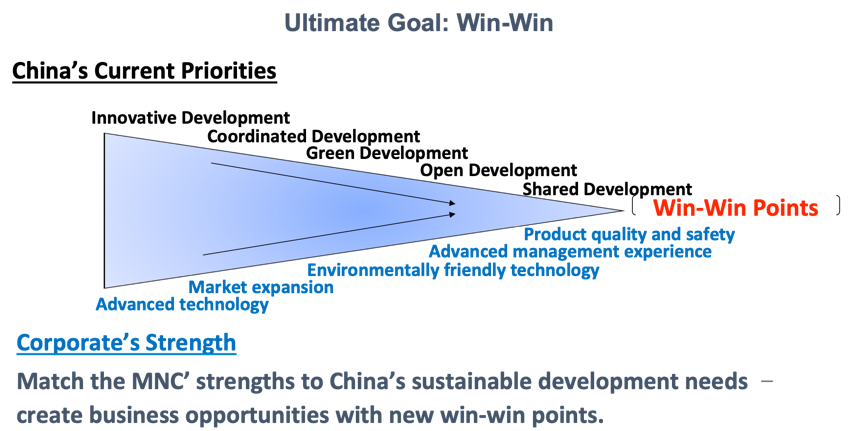 How China Has Developed the Economy in The Past 40 Years